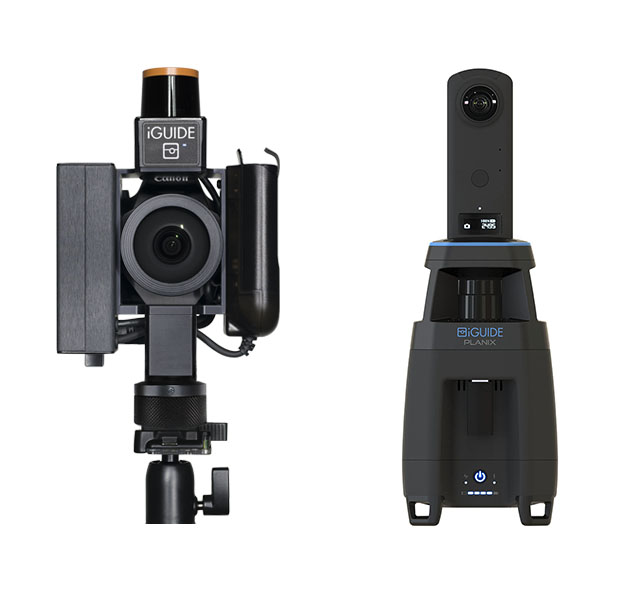 How do IMS-5 and PLANIX compare?

The best place to start is with their appearance. IMS-5 is built using a Canon DSLR and a rotator while PLANIX uses a Ricoh THETA Z1. Their radically different appearances might lead one to believe that they are designed for different purposes, but that can’t be further from the truth.

Both systems capture data from a laser scanner and 360° images from an integrated camera. Both systems are controlled through WiFi and a smart device. Both systems use Stitch to process their data and requires that data be sent in via the iGUIDE portal for drafting. An iGUIDE created with IMS-5 should be extremely similar to one created by PLANIX.

The most interesting similarities and differences become obvious when comparing the cameras in the context of everyday use.

The process of capturing a single scan with IMS-5 requires multiple steps and that can be challenging for some new users. PLANIX eliminates the extra steps by measuring and photographing all 360 degrees at once. This means PLANIX does not require manipulation while shooting beyond occasional leveling and being carried from one scan location to another. Small mistakes that can compromise the data or visuals are less likely because of the simpler operation.

Scanning an entire house with PLANIX has not changed much when compared to IMS-5. It will be familiar to experienced iGUIDE shooters. Every space needs to be scanned for adequate coverage so the final iGUIDE can include accurate floor plans and provide a valuable 3D tour experience. The biggest difference in the overall workflow is when aligning the laser data between each scan – PLANIX features a more powerful onboard computer and uses the alignment algorithms borrowed from Stitch, whereas IMS-5 has a higher frame rate laser scanner and uses SLAM (Simultaneous Localization and Mapping) algorithms typically used by industrial robots.

PLANIX is faster than IMS-5. This will vary greatly from one photographer to another, but on average it’s around 25% faster for an experienced photographer when shooting a full iGUIDE for a listing. The more compelling speed advantage is for those who are newer to iGUIDE and struggle with data alignment.

PLANIX will automatically align your data between each scan. This means, if successful, you can skip the data alignment altogether and have a perfectly aligned set of data to review immediately after the shoot. The original manual method of aligning data is still available and can be used at any time if preferred or to fix any mistakes that occur in auto mode. Data alignment is typically a greater struggle for newer iGUIDE shooters than experienced ones, but the time savings is beneficial for all users.

The changes are more than just cosmetic. The new UI has been modeled after familiar camera apps to make it more comfortable to learn. Anything unnecessary has been eliminated and almost every aspect has been improved.

PLANIX weighs about 1000g (2.2lbs). This means you can use a lighter tripod and carry less weight while moving around on site. PLANIX’s weight is also more evenly distributed which means it feels more balanced when carried. IMS-5 weighs about 2400g (5.2lbs). A sturdier tripod is recommended for IMS-5 because its weight is not centered above the rotator and this can cause a weaker tripod to flex. PLANIX also has feet and can be placed on a surface for charging or for scanning very close to the ground.

PLANIX provides power to the Ricoh THETA Z1 and its battery from the system battery and has a runtime of 7 hours when both batteries are fully charged. Charging has been simplified and only requires that the system be plugged in using the included power supply.

IMS-5 requires two separate batteries which have different capacities, different charging methods and have their capacities reported separately in Survey. The system battery for IMS-5 has a runtime of 8-10 hours when fully charged, but the DSLR battery’s runtime will vary depending on the number of photos taken and the amount of time the LCD screen is turned on.

Does IMS-5 offer any advantages?

Should you toss your IMS-5 on a shelf and get PLANIX?

While faster shoot times and a simpler workflow help everyone, newbies benefit more than experienced photographers when using PLANIX. If you already own an IMS-5, then PLANIX makes sense as a second camera or as a simpler option for a new hire. When given the choice you may also prefer the manual controls that IMS-5 offers. IMS-5 also has years of proven performance and is a “tried and true” option for creating iGUIDE tours.